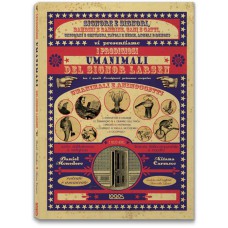 "Welcome, ladies and gentlemen, boys and girls, dogs and cats, unicorns and centaurs, tables and chairs, angels and demons! Come in and discover the only, unmatched, immeasurable, fabulous Exhibition of animals of Mr. Larsen! Come in and wonder, because this is not an ordinary tent. Imagine: there is not even a small animal on show. Here you can admire incredible beings: animalpeople and animalthings. This is a museum, a living catalogue of fantastic characters that really exist. Animalpeople are a curious mix of animals and people or people and animals, depending on how you see it. Mr. Larsen has been traveling for many years in order to find at least one specimen for each species. And today, at last, his efforts are rewarded by this peculiar space, that allows him to show his findings. Along with such extraordinary specimens you can find several animalthings, astonishing crossings of animals and artworks. To cross the exhibition’s threshold is to get into a matchless place that nobody has ever seen before. Come in and open your eyes wide, take advantage of this marvellous show! The admission is free for everybody and, of course, animals are welcome.”

A book designed in a nineteenth century and circus style, an original bestiary that will make you laugh, play, wonder and free your imagination to create new animalpeople and animalthings.

Daniel Monedero is a Spanish writer and screenwriter. He is above all a screenwriter for television series and teaches acting, dramatic art, and screenwriting for both cinema and television. At the same time he works in the field of children’s literature and is the author of several illustrated books.

Aitana Carrasco Inglés is born in Valencia in 1978. She obtained a Diploma in Fine Arts at the Polytechnic University of Valencia. With her first illustrated book Ramona la Mona, she was awarded the IX Premio Internacional A la Orilla del Viento 2005. From then on, she has devoted herself to children’s literature, both as a writer and as an illustrator. She was awarded the White Ravens in 2009 and 2010, and was included in the lists Los Favoritos by IBBY México in 2008 and Los Mejores Libros Infantiles y Juveniles by Banco del Libro de Venezuela in 2010. Her works have been exhibited in Spain, Mexico, Italy, Slovakia, Iran, United Arab Emirates, Japan, Argentina and France. She has collaborated with several magazines and published many books with several publishers (Fondo de Cultura Económica, Kalandraka, Tàndem, Océano, Bromera, Logos Edizioni, A Buen Paso, etc.).