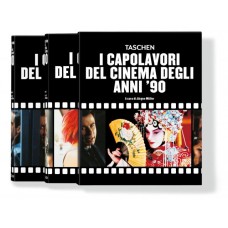 As the 20th century came to a close...
All the 1990s movies most worth remembering

All the 1990s movies most worth remembering. It was a delicate and complex task that required a fair bit of soul-searching, but we did it: we took a complete list of all movies released in the 1990s around the world and whittled it down to just 144 of our very favorites. These are the movies that emblematize the 90s and most deserved to be remembered, preserved, and passed down to future generations. But Favorite Movies of the 90s is more than just a list. It’s also an opulent factbook that any self-respecting moviegoer shouldn’t be without. Packed full of photos and film stills in two weighty volumes, this set will bring you right back to the 90s with reminders of films you saw and plenty of reasons to see the ones you missed. This was a decade when independent cinema went mainstream and, leveling the playing field, changed the movie business forever, while big-budget special effects kept Hollywood strongly in the game; the diversity of the films included here bears witness to this phenomenon.

The editor:
Jürgen Müller has worked as an art critic, a curator of numerous exhibitions, a visiting professor at various universities, and has published books and numerous articles on cinema and art history. Currently he holds the chair for art history at the University of Dresden, where he lives. Müller is the series editor for TASCHEN’s Movies decade titles.