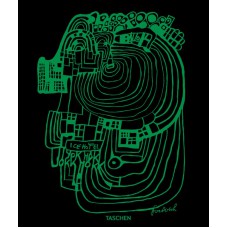 “A world full of color,” said Friedensreich Hundertwasser, “is synonymous with paradise.” With his demonstrations and actions, his manifestos for nature, for more human-oriented architecture, and for the improvement of the quality of life and living conditions, Friedensreich Hundertwasser was one of the most fascinating artists of the 20th century. He became a symbolic figure, not only as a painter but also as an architect, ecologist, and philosopher, in particular for all those who are searching for a life tuned to the natural and the human.

This standard edition consists of the first volume of TASCHEN’s limited edition Friedensreich Hundertwasser 1928–2000, and offers a comprehensive presentation of Hundertwasser’s work and life, with detailed texts by Hundertwasser’s longtime friend Wieland Schmied.

The author:
Wieland Schmied has been President of the Bavarian Academy of Fine Arts in Munich since 1995. He has organised over one hundred art exhibitions and is the author of many books on 19th- and 20th century art, including monographs on Caspar David Friedrich, Alfred Kubin, Giorgio de Chirico, Edward Hopper and Francis Bacon.