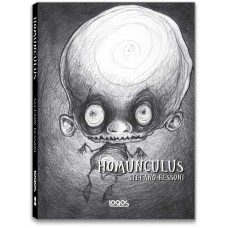 Lazarus Zendak is a physician, anatomist and taxidermist well-known for his anatomical preparations, especially foetuses and children preserved in formaldehyde. One day his beloved daughter Rachel, who usually helps him with his experiments, falls from a cliff and the man, driven mad by grief, decides to create a surrogate child. So he feverishly starts working on the creation of a homunculus: to this purpose he mixes human semen, mandrake’s heart, blood, strawberry sap and dew and waits for the homunculus to gestate, feeding him with his blood. He finally flees with his creature to a faraway country, to prevent people from seeing and judging it.
Stefano Bessoni tells this gothic fairy-tale in a nursery rhyme and black and white pencil illustrations in his typical macabre yet humorous style. In verses and images, he explores the obsession that pushes a man to defy Nature and presents three recipes for making a homunculus, namely a miniature human being artificially created through alchemic rituals, whose legend dates back to the beginning of 1500. Three recipes are suggested here: Paracelsus’ recipe for homunculus in a pumpkin, Dubuffet’s recipe for homunculus in an egg and, last but not least, the recipe for homunculus in vitro by Zendak himself.