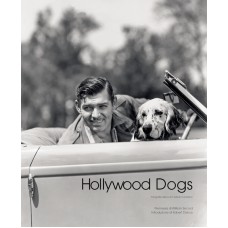 Hollywood Dogs showcases a fine selection of photographs from the famous John Kobal Foundation. Taken between 1920 and 1960 during the ‘Golden Age’ of Hollywood, these 147 images feature stars including Humphrey Bogart, Buster Keaton and Audrey Hepburn posing with dogs of every stature and breed. In almost every case, these stunning photographs have never been seen before now.

As much as the Hollywood studio system tried to control every aspect of their stars’ lives, there was nothing the bosses could do to manipulate their illustrious employees’ responses when photographed with their dogs. Hollywood Dogs celebrates this special relationship between these famous owners and their animals. Often caught off-guard, and almost always relaxed and natural, these are photographs of the Hollywood stars as real people.

Amongst the images are some of the most famous dogs in Hollywood films: Lassie; Asta; Rin Tin Tin and Toto from the Wizard of Oz. There are also a few carefully-set-up publicity shots, such as Frank Sinatra on the set of Pal Joey, and Jean Harlow accessorized with a large hat and two Old English sheepdogs.

Each image has been researched to identify the breed and wherever possible, the name of the dog, and author Catherine Britton has included intriguing details about the location and background to the photograph.