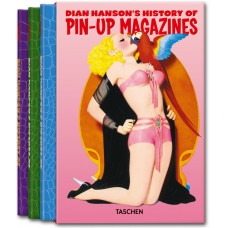 Open your notebooks, sharpen your pencils, and get ready for a history lesson like none you’ve ever experienced. You’re about to learn everything you could ever want to know about the world history of men’s magazines—not magazines about sports, not fashion, not hunting or fishing or how to build a birdhouse in ten easy steps, but those titillating periodicals embracing the subject dearest to all heterosexual men’s hearts and other body parts: the undraped female form.
Editor Dian Hanson traces the fascinating development of the genre from 1900 to 1969 in three compact, informative volumes. In Volume 1 you’ll learn about the first magazines that appeared around 1900 in France, Germany, and the U.S., and follow the development of the genre through the First and Second World Wars. Covered are men’s magazines masquerading as movie magazines, humor magazines, art magazines, nudist magazines, and “spicy” fiction. Volume 2 documents the proliferation of pin-up magazines following World War II, most notably a little item called Playboy that debuted in December 1953 and spawned dozens of imitators. This volume also charts the emergence of English men’s magazines, fetish magazines, and the top five covergirls of the 1950s. Volume 3 begins with an explosion of new American pin-up magazines following the loosening of U.S. obscenity laws, and continues with French titles in decline, England going pervy; nudists going hippy, and Germany going pervy, hippy and political.