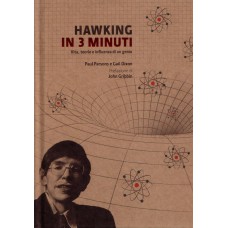 Digesting his life, theories and influence in 3-minute morsels
Read it – and the Universe is your oyster!

Stephen Hawking is regarded by many as the greatest physicist alive today—a living genius. This book tells his story in three parts. The first deals with his incredible life. Diagnosed with a crippling medical condition at the age of 21, he is now confined to a wheelchair and only able to talk using an electronic speech synthesizer. His seminal contributions to physics and cosmology are set out in lay-language in chapter two. Hawking has shown how black holes play host to infinitely dense “singularities” at their cores—and that the Universe itself may have begun in a similar state. He famously proved that black holes aren’t so black but can actually emit particles and radiation. And he later produced theories blending relativity and quantum mechanics to explain how our Universe may have been created from nothing. Finally, chapter 3 takes stock of Hawking’s influence: how he has not only set the bar for modern research in quantum physics and relativity but also become a campaigner for numerous important causes.

“My goal is simple. It is a complete understanding of the Universe, why it is as it is, and why it exists at all.”  – Stephen Hawking

The authors:
Paul Parsons is a science writer who holds a PhD in cosmology and was formerly editor of the award-winning monthly science and technology magazine BBC Focus. He was Consultant Editor on 30-Second Theories and contributes popular science articles to publications ranging from the Daily Telegraph to Men’s Health.

Gail Dixon is a journalist and editor with many years’ experience and has worked as a commissioning editor for BBC Focus magazine. She is currently co-authoring a book on the Periodic Table of Elements.