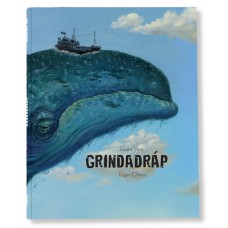 Somewhere between Iceland and Norway, in the North Atlantic Ocean, is an archipelago of 18 small volcanic islands: The Faroe Islands. One day, near one of these islands, a ship appears flying a black flag with a white skull: the ship of the good pirates of Sea Shepherd, who navigate the waters of the world to protect and save sea creatures.
They land on one of the islands in a beautiful early summer evening, and find themselves in a picturesque fisherman’s village, surrounded by uncontaminated nature, where time seems to have never passed.
But the beautiful scenery is soon shattered. In no time the island comes urgently alive: fishermen suddenly set out to sea, to chase hundreds of pilot whales and Atlantic white-sided dolphins passing near the islands in search of fish and squids to eat. Adults, adolescents and old people run towards the beach, clutching knives, hooks and sharp sickles. Suddenly, the clear glimmering sea runs red…
It is a special day for the inhabitants of the Faroe Islands, the day of the Grindadráp. In the distant past the Grindadráp was deeply important because whaling enabled the entire population to survive, while today it is only a tradition. The meat of these mammals can no longer be eaten every day, due to the degree of ocean pollution, which can make it harmful to humans.
Each year a thousand pilot whales and other cetaceans are killed just to keep an old tradition alive. Each year, Sea Shepherd travels to the Faroe Islands to photograph and document the slaughter that takes place there, trying to increase global public awareness.
This book is a new, important memento that combines the touching story told by Geert Vons (Sea Shepherd) with the evocative, vibrant images by Roger Olmos, vegan artist and animal-rights activist who has been promoting respect for the environment and all living creature for years through his art.

With this book #logosedizioni, in collaboration with Sea Shepherd, launches a new book series aimed at making people of all ages aware of all the crimes committed every day against the oceans and the creatures that inhabit it.

Sea Shepherd is an international non-profit organisation founded by Captain Paul Watson in 1977 in Vancouver, Canada. Its mission is to protect and preserve marine fauna by resisting the destruction of their natural habitat and the massacre of non-captive species in oceans around the world. By safeguarding the delicate biodiversity of ocean ecosystems, the organisation works to ensure their survival for future generations. Sea Shepherd practices direct action tactics to investigate, document and, when necessary, act to detect and prevent illegal activities at sea. The Sea Shepherd Conservation Society today has independent entities in over twenty countries, which operate together on direct action campaigns around the world. In 2013 Sea Shepherd Global was founded in Amsterdam to coordinate communications and logistics for the Sea Shepherd fleet on campaigns outside the United States. Sea Shepherd Italy has obtained official recognition as a Non-profit Organisation.

The author:
Geert Vons is a painter, designer and tattoo artist. Since 1993 he has supported the Sea Shepherd cause. After high school, he undertook a training course for teachers in the field of craft techniques and after a few years he moved on to study alternative heating systems at a special school. He studied Sinology at the University of Leiden and earned a Master of Arts. In 1999 he founded the non-profit organization Whale Weirdo, an initiative aimed mainly at the artistic promotion of marine fauna. He has written, illustrated and published numerous books for children, driven above all by his passion for creatures of the oceans and by the desire to draw attention to threats to the marine ecosystem. As a painter, he paints on pallets, canvas and 3D objects in general. Together with Arjen Weijers, he founded Artists for Sea Shepherd, and since 2009 he has been president of Sea Shepherd Netherlands. He is art director of Sea Shepherd Global, for which he designed the logo.