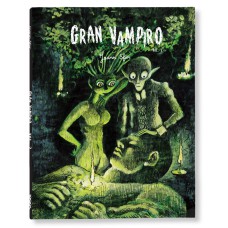 The most melancholy, romantic and clumsy vampire in the history of comics returns with two new episodes to read all in one go, followed by a final section taken from the author's archives. In “The community of magicians” and “The people is a golem,” a social and at times political dimension violently bursts into the life of the secretive Fernando. In Vilna, the hunt for witches (and magicians) rages, echoing in violence and blindness the horrors of Nazi persecutions. On the trail of the evil “hunters” we find two of our old acquaintances, Inspector Mazock—known as Humpty-Dumpty—and his deputy, the charming Jew of Prague Vincent Ehrenstein. It is their task to restore peace in the city, while Dr. Casiglia—a magician with a vocation as Batman who lives in a manor full of magic books—is more inclined to bypass the law and take justice in his own hands. To do this he needs the Golem, so he kidnaps him and uses him to attack the enemies of his community. Will Fernando manage to save the clay giant from the clutches of Dr. Casiglia and the Vilna police and bring him back to his creator Elia? We will find out by following these exciting new adventures in which the gentleman vampire will not fail to meet intriguing young women, ready to give him a heartthrob: like his new and surly lodger Magda, an artist with a passion for motorcycles; the charming red-headed apprentice witch Nope, who falls madly in love with him; Zaïneb, a ghost-witch with a dark-chic look, who gets into the habit of slipping into his coffin while he sleeps... and of course the unforgettable ex-girlfriend Liù, who occasionally returns to the task of bewitching him with her golden eyes and giving him some new headaches.

Dulcis in fundo, Joann Sfar opens his archives, revealing his sources of inspiration and offering us some more episodes illustrated in black and white nib. Thus, we will follow the evolution of the characters of the Grand Vampire series, such as Inspector Mazock, Vincent Ehrenstein, Michele Donati, Elia and the Golem and of course Fernando himself. A precious opportunity to go deep into the vampire world created by Sfar, a world made of history and legend, drama and comedy, eroticism and candor.

The author:
Born in Nizza in 1971, Joann Sfar is a prolific and talented author of comics, who skilfully deals with both drawing and script. In 1994, he published his first comic book, Les Aventures d’Ossour Hyrsidoux, and since 2000 he has achieved growing appreciation from audience and critics alike, winning several prizes. He collaborates with the press, illustrates philosophical classics and has written several comic books, many of which have been translated into Italian. His titles published in English include Klezmer: Tales of the Wild East, Vampire Loves, the six volumes of Sardine in Outer Space, The Professor’s Daughter, The Rabbi’s Cat, Little Vampire, Dungeon and The Little Prince. In 2004 he won the Grand Prix de la ville d’Angoulême, special award for the thirtieth anniversary of the festival. As a director, he directed the musical Gainsbourg (vie héroïque), adapted from his graphic novel and awarded with three César awards, the animation movie Le Chat du Rabbin, an adaptation from his comic book series with the same title and nominated as the best animation movie at the European Film Awards, and Petit Vampire, adapted from his series about Little Vampire.