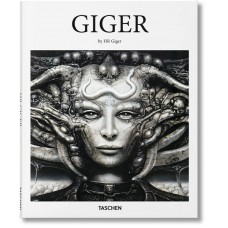 For decades H.R. Giger (1940–2014) reigned as one of the leading exponents of fantastic art. After he studied interior and industrial design for eight years at the School of Commercial Art in Zurich, Switzerland, from 1962 till 1970, he was soon gaining attention as an independent artist, with endeavors ranging from surrealistic dream landscapes created with a spray gun and stencils, to album cover designs for famous pop stars, and sculptures. In addition, Giger’s multi-faceted career includes designing two bars, located in Tokyo and Chur, as well as work on various film projects—his creation of the set design and title figure for Ridley Scott’s film Alien won him not only international fame but also an Academy Award for Best Achievement for Visual Effects (1980).

The artist:
H.R. Giger (1940–2014) was a Swiss surrealist painter, sculptor, and set designer. He first received acclaim in the 1960s with his airbrushed fantasy landscapes, and rose to fame through high profile movie work, most notably as part of the team behind the visual effects in Alien, which won an Academy Award. H.R Giger was named in the Science Fiction and Fantasy Hall of Fame in 2013.