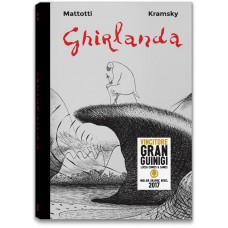 GHIRLANDA:
“Beyond the sighs of the clouds, between the dusk’s horizons, lays the land of Ghirlanda. Its vast plains and soft hills seem to capture the light, and the climate is mild. From time immemorial this is the country of the Ghirs, pacific creatures who love to contemplate the magic of their land with the amazement of ancient children.”

WINNER OF THE GRAN GUINIGI PRIZE AS BEST GRAPHIC NOVEL 2017
In a fantastic world populated by imaginary and marvelous creatures, Ippolite – the shaman’s son – sets out after his wife Cocciniglia, who has been missing for seven days now from the Ghirs’ village. He doesn’t know yet that his journey will be much longer and more dangerous than he could expect, because it is the whole country of Ghirlanda that is in danger, threatened by a terrible curse and by the lethal germ of evil. To save his family and all the Ghirs, Ippolite will have to push beyond the borders of the known lands, into the vast and dreadful Terrae Incognitae and even further, where the living are not welcomed, to find the frozen heart of the Hoarse Mountain.
A story about love and courage, loyalty and redemption, that also speaks about our inherent weakness and our readiness to close our minds and hearts and let us be governed by our darkest instincts, charmed by the charisma of false guides towards salvation.

The soft black-and-white drawings by Lorenzo Mattotti mix with the evocative texts by Jerry Kramsky to create a dreamlike and allegoric universe that, in the words of the illustrator, “evokes the original innocence of old comic strips such as Alley Oop and The Moomins, full of strange and gentle animals, who are also able to feel emotions and suffer”.
The extraordinary talent of the two authors will guide us by hand through a 400-page fairy-tale adventure into the deepest parts of their dreams, offering us an epic work which is at the same time a personal research and a journey beyond the limits of traditional comic books.

15 years after Jekyll & Hyde, Mattotti and Kramsky are back for a new collaboration: Ghirlanda, a never-published-before comic book that took 10 years to complete and is now published simultaneously by #logosedizioni in Italy and by Casterman in France.

Lorenzo Mattotti lives and works in Paris. After his studies in architecture, he started off in the late 1970s as a comic strip artist and in the early 1980s created the Valvoline collective together with other artists. In 1984 he published Fires, which was welcomed as a great event in the world of comics and won several important international prizes. From Incidenti to Stigmate, from Signor Spartaco to Doctor Nefasto, L'uomo alla finestra and several other titles, Mattotti’s work has evolved consistently and, at the same time, with the eclecticism of an artist who is always in search for new territories to explore. Today his books are translated all over the world and his illustrations are published in newspapers and magazines such as The New Yorker, Le Monde, Das Magazin, Süddeutsche Zeitung, Le nouvel Observateur, Corriere della Sera and la Repubblica. Mattotti re-interpreted the creations of the most important fashion designers for the magazine Vanity, and in 2010 designed all the covers for the architectural monthly magazine Domus. He has illustrated several children’s books, such as Pinocchio by Collodi and Eugenio, that won the Grand Prix of Bratislava in 1993, one of the most important awards in the field of children’s publishing. Mattotti’s works were featured in many solo exhibitions, such as the anthological expositions at the Palazzo delle Esposizioni in Rome, at the Frans Hals Museum in Haarlem and, more recently, at the Musei di Porta Romana in Milan. Mattotti has created posters, covers and advertising campaigns: he designed the posters for the Cannes Film Festival in 2000 and for the Estate Romana. Among his most recent publications: Jekyll & Hyde (NBM Publishing, 2003) and The Crackle of the Frost (Fantagraphics, 2003) and, at the same time, I manifesti di Mattotti (2002) and Angkor (2003) for Nuages; in 2008, Appunti sul paesaggio for Tricromia and Le avventure di Pinocchio in the Einaudi series “I Millenni”; in 2009 Hänsel e Gretel for Orecchio acerbo/Gallimard, whose amazing illustrations complete Neil Gaiman’s texts in the English edition. In 2010, a collaboration with Lou Reed gave birth to The Raven (Fantagraphics Books, 2012). In 2004, he created the segments between the three episodes of Eros, a film by Wong Kar-wai, Steven Soderbergh and Michelangelo Antonioni. In 2007 he made one of the six episodes of the collective animated film Peur(s) du noir. In 2011, he worked at the animated sequences of the movie by Charles Nemes, Il Etait une fois... peut-être pas and, in 2012, he created backgrounds and characters for Pinocchio, an animated film by Enzo D’Alò. In 2012, #logosedizioni launched the series “Works”, a systematic publication of his illustrations: the first volume deals with pastels and second one is a tribute to the fashion world. In 2013, #logosedizioni released also the visionary work Oltremai, which was exhibited at the Pinacoteca di Bologna. In 2014 he created Vietnam, for the “Travel Book” series by Louis Vuitton. Constantly searching for a language that can go beyond the existing boundaries, the assorted works of Mattotti have been exhibited in Sconfini, and the exhibition catalogue has been published by #logosedizioni in 2016. In 2017, Mattotti collaborates again with Jerry Kramsky, creating the new graphic novel Ghirlanda (#logosedizioni), an epic story that carries the reader into a magical journey. Mattotti’s universe by now seamlessly ranges over comics, painting, illustration and film animation.

Fabrizio Ostani, aka Jerry Kramsky, met Lorenzo Mattotti when they were students and worked with him as a scriptwriter before Mattotti started working on solo projects. Their long-lasting friendship has given birth to many comic books: Labyrinthes and Murmure (English edition: Murmur, Penguin, 1993), published by Albin Michel in 1988 and 1989, Doctor Nefasto (Granata, 1991), and Docteur Jekyll & Mister Hyde (Casterman, 2002; English edition: Dr. Jekyll & Mr. Hyde, NBM Publishing, 2003), as well as various children’s books, such as Grands Dieux (Seuil Jeunesse, 1997), The Cranky Sun (Little Brown & Co, 1996), and Il mistero delle antiche creature (Orecchio Acerbo, 2007). In 2007 he worked at the screenplay for the animated feature film Fear(s) of the Dark, again in collaboration with Mattotti. He worked with illustrator Gabriella Giandelli at some episodes of the animated series Milo, produced by Gertie, and at the illustrated book Il bambino notturno (Orecchio Acerbo, 2005). He wrote and illustrated the children’s books Quando SuperTrippa cercò di conquistare la terra (Gallucci, 2007) and La stanza delle ombre malvagie (Gallucci, 2010). With Lorenzo Mattotti, in 2017 he published Ghirlanda (#logosedizioni), winner of the Gran Guinigi prize.
His books for #logosedizioni are: Ghirlanda and La zona fatua.