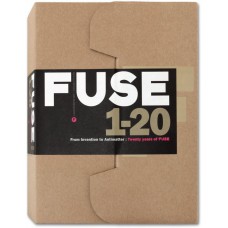 Launched by Neville Brody and Jon Wozencroft in 1991, FUSE was the ground-breaking publication that took design and typography into radically new and unforeseen spaces. The major influence of its revolutionary and experimental approach to typographic language reverberates still, and today—twenty years after its launch—the explorations carried out by some of the most famous and influential names in the industry stand out as futuristic and ahead of their time.
Taking the alphabet as its base, and enabled by the advent of digital design, FUSE became a laboratory for new ideas and risks, as well as a hothouse of new thinking. Published over twenty editions, each issue was themed and included both fonts and posters by specially-commissioned collaborators, all of which are on show here.
To commemorate the release of issue 20, TASCHEN brings you a complete compendium of all the issues. Exclusive to this publication are FUSE19 and FUSE20, two newly-commissioned and never-before published issues, in the form of 10 A2 posters and 24 downloadable fonts, making this boxed edition a collector’s item. This is the legacy created by the best contemporary thinkers on typeface design: the list of contributors to FUSE reads like a who’s who of typographic design, from Erik Spiekermann to Stefan Sagmeister, Peter Saville, Jonathan Barnbrook and Tobias Frere-Jones, plus many more. Editorial contributors include Adrian Shaughnessy and Jon Wozencroft.

Included in this special edition:

The editors:
Neville Brody is an internationally renowned designer, typographer, art director, brand strategist, educator and founder of the Research Studios network (www.researchstudios.com). In addition to lecturing and contributing to a variety of cultural and educational initiatives, Brody works both independently and alongside Research Studios designers on commercial and privately commissioned projects. In 2010 Brody was awarded a Special Commendation by Prince Philip for his Design Council: Designer of the Year Prize and was made a Fellow of the University of the Arts, London his alma mater. In 2011 The Museum of Modern Art in New York selected Brody’s font Blur as part of its permanent design collection. Brody was also made a Royal Designer for Industry (RDI) by the Royal Society of Arts in November that year, joining many of his peers in the creative sector. Brody is the Dean of Department for Visual Communications at the Royal College of Art, Vice-President of the D&AD and chair for their education sub-committee. He also sits on the BBC Online Creative Advisory Board and is a member of the film education advisory board to the DCMS.
Jon Wozencroft is a Senior Tutor for the Visual Communication Programme at The Royal Collage of Arts in London. He is the author of The Graphic Language of Neville Brody 1 & 2, and set up FUSE with Brody in 1991. In 1982 Jon Wozencroft founded the audiovisual publisher Touch, to push the powerful chemistry between sound and visual media. His photography and design work has appeared in a number of publications, including Fax Art, Sampler, G1, Merz to Emigre and Beyond and most recently Cover Art By. Wozencroft has also taught at Central Saint Martins College of Art and Design, The London College of Printing, and has given lectures at numerous art colleges and universities around the world.