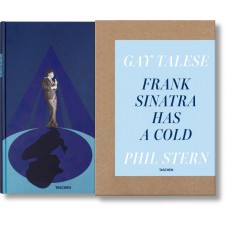 All or nothing at all
A breakthrough portrait of Frank Sinatra, American celebrity, and Hollywood in the 60s

In the winter of 1965, Frank Sinatra was approaching the twilight of his show business career. Nudging 50 years old, Ol' Blue Eyes was on the defensive. When journalist Gay Talese approached Sinatra for an interview set up by Esquire, he received only a rebuff in response: Sinatra was under the weather and unavailable for interview.

Undefeated, Talese stayed in L.A., hoping Sinatra might recover and reconsider. He used the time to observe the star from a careful distance and to interview as many of his friends, associates, family members, and hangers on as he could. He never did receive the one-on-one he had hoped for but his tenacity paid off: his profile “Frank Sinatra Has a Cold” went down in history as the advent of New Journalism and as Esquire’s best feature of all time, celebrated for its rigorous factual account alongside vivid storytelling.

In this Limited Edition, TASCHEN publishes Talese's penetrating portrait alongside evocative portraits of Sinatra from Phil Stern, the only photographer to cover Sinatra for four decades from the 1940s–1970s, and other photojournalist greats. The pictures capture Sinatra both in rare moments of pensive solitude and in the company of such key players as John F. Kennedy, Marilyn Monroe, Sammy Davis Jr., Count Basie, and Dean Martin.

Like TalesIts crystalline portrait of a paradoxical persona and personality, revealed as much about a singular psyche as it did about the spirit of the times.

Together, Stern’s photographs and Talese’s probing profile offer an outstanding chronicle not only of one of the era's most guarded figures, but also of entertainment, celebrity, and America itself.

Limited edition of 5,000 numbered copies, each with letterpressed text and slipcase, and signed by Gay Talese.

About the series:
TASCHEN’s literary series takes great works of nonfiction and pairs them with photography from the golden age of photojournalism.

The author:
Gay Talese joined the staff of The New York Times in 1955, and remained there for a decade. During the 1960s and 1970s he contributed many articles to magazines, principally Esquire. Talese is the bestselling author of eleven books including Thy Neighbor's Wife, Honor Thy Father, and A Writer's Life. He lives in New York City.

The photographer:
Phil Stern (1919–2014) was one of the preeminent photographers of Hollywood's golden age, shooting for Look, Life, and Colliers, and working as a “special photographer” on the set of over 100 feature films, including Some Like it Hot, West Side Story, and What Ever Happened to Baby Jane?