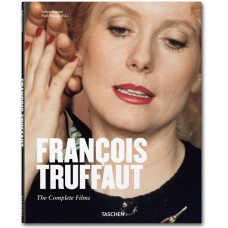 Icon of the Nouvelle Vague
Truffaut's rejection of traditional cinema

From The 400 Blows to Jules and Jim to The Last Metro, François Truffaut (1932–1984) practically defined the French cinema of his era and was one of the founders of the New Wave which took the industry by storm in the late 1950s. His endlessly touching and romantic films—always tinged by a touch of reflective sadness—made him one of France’s favorite and most successful directors. This book traces Truffaut’s career and includes rare images drawn from his archives.

The editor:
Paul Duncan has edited 50 film books for TASCHEN, including the award-winning The Ingmar Bergman Archives, and authored Alfred Hitchcock and Stanley Kubrick in the Film Series.
The author:
Robert Ingram has lectured in French language, literature, and film at the universities of Wolverhampton and Oxford. With Diana Holmes, he co-authored François Truffaut (1998) and jointly edited Manchester University Press’s acclaimed French Film Director series.