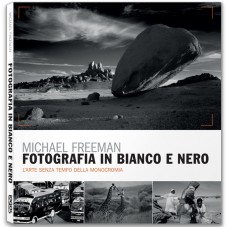 The new black and white
The timeless art of monochrome

In his long and distinguished career, photographer and author Michael Freeman has concentrated principally on documentary travel reportage, and has been published in dozens of major publications worldwide, including Time-Life, GEO and Smithsonian magazine, for whom he has shot dozens of feature stories across the globe over the course of a three-decade relationship.
In this book Freeman focuses on the black and white technique, which established itself as the senior tradition of photography over the course of more than a century: its reasons for being have only rarely been questioned. However, following the evolution of digital photography, its status is changing. Freeman describes black and white with a modern approach, jolting it out of its normally complacent position, with simple explanations and useful tips for the editing process. Page after page, discover the best ways to control the conversion of colour to black and white – every digital processing technique you may need is detailed in this comprehensive volume. Beyond simple tutorials, the style and aesthetics of this powerful medium are thoroughly presented through analysis of famous photos through history, and insightful commentary on what makes each image work. Reinvigorate your photography with the striking, artistic quality of black and white, and end up with your best pictures ever.

Michael Freeman is perhaps the most widely published authority on photography in the world, not to mention a successful photographer in his own right. A graduate of Brasenose College, Oxford University, Freeman first worked in London’s advertising industry during the 60s. In 1970, he made the life-changing decision to travel up the Amazon river with two second-hand cameras, and when many of the resulting pictures were published in Time-Life, he chose to embark on a full-time photographic career. Of his many books, which have sold over 4 million copies worldwide, more than 60 titles are on the practice of photography. For this photographic educational work, he was awarded the Prix Louis Philippe Clerc by the French Ministry of Culture. Freeman’s books on photography, including the best-selling The Photographer’s Eye, have been translated into 27 languages.