THE BOOK OF IMPRUDENT FLORA 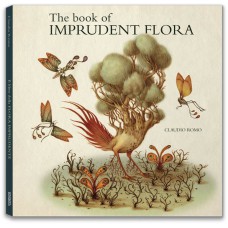 Nature, as we all know, defies any imagination. In order to preserve and propagate life, it has provided plants and animals with great ingenuity and adaptability, leading to the appearance of species that are as magnificent as they are amazing. There’s an island in particular where you can gaze upon the kaleidoscopic array of shapes and colours that the living creatures of this planet are capable of assuming. This island doesn’t appear on any geographical map, because to this day no one really knows its exact position. We just know that it emerges from the southern waters of the Pacific Ocean, lost somewhere between Tierra del Fuego and Antarctica. Only very few people were lucky enough to visit it, and even less are those who came back to tell the rest of the world about the marvellous things they found there. One of them was the explorer and naturalist Lázaro de Sahagún, who set sail on a geographical expedition and eventually landed on its shores in fortuitous circumstances. In his diary, he collected all the stunning forms of vegetal life that he stumbled upon, cataloguing them with the accuracy of a 19th-century scientist, but above all with the curiosity and the befuddlement of a humble human being in front of Nature’s wonders.

After A Journey in the Phantasmagorical Garden of Apparitio Albinus, once again Claudio Romo swallows us up in the vortex of his exuberant visions, as we dig into this “vegetal bestiary” where the inspirations that fired his imagination clearly emerge: Borges, Bioy Casares, and above all the Franciscan friar and missionary Bernardino de Sahagún (who gives his name to the fictitious author of this book), who in the 16th century collected in the illuminated manuscript Florentine Codex all the information about the peoples and culture of central Mexico, as well as on the plants and animals of those lands. In the wake of his prestigious predecessors in the history of Latin American literature, the Chilean author and illustrator presents us with a meticulous illustrated account of an imaginary expedition in a non-existent land. Because after all, who can really tell what the difference is between reality and fantasy?

The author:
Claudio Andrés Salvador Francisco Romo Torres (Claudio Romo) is an illustrator and writer born in the port city of Talcahuano, Chile, in 1968. He studied Plastic Arts at the Universidad de Concepción and got a Master degree in Visual Arts with a specialization in Graphic Design at the Academia de San Carlos, Escuela Nacional de Artes Plásticas, UNAM México. He currently teaches graphic design and drawing at the Universidad de Concepción, Chile.
His books for #logosedizioni: A Journey in the Phantasmagorical Garden of Apparitio Albinus (also available in Italian), Nueva Carne, The Book of Imprudent Flora (also available in Italian and Spanish) Tavola smeraldina (also available in Italian and Spanish) and Bestiario Mexicano.