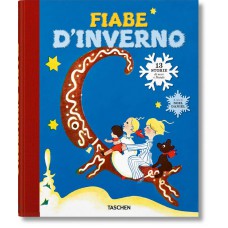 Despite its chilly weather and barren landscapes, wintertime has inspired some of the most magical and heartwarming stories in history. Around the world, this season of celebration, frost and snow, religion, tradition, and adventure has produced such classics as Clement Moore’s  "‘Twas the Night Before Christmas," and such colorful tales as the account of a pre-Christmas Posada parade in Mexico City.
TASCHEN’S Wintertime Tales pays homage to this rich variety of winter storytelling with fifteen tales dating 1823–1963. Featuring authors and illustrators from the United States, Scandinavia, Japan, Poland, Latvia, and Germany, it includes stories such as the merriment of a snow day, skiing for the first time, getting ready for Santa Claus, losing one’s mittens, and the Chinese New Year.
Each tale has been chosen for its inspiring artwork and soulful plot, resulting in a carefully-curated collection of adventure, community, and world culture. The perfect addition to those evenings of hot cocoa, marshmallows, and blankets, this heartwarming book is sure to enrich appreciation of a particularly special season, and to capture imaginations of young and old alike, even if it's too cold to play outdoors.