THE FAIRY TALES OF THE BROTHERS GRIMM - pocket size 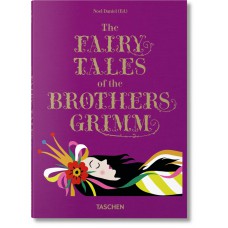 Mirror, mirror on the wall...
A compilation of Brothers Grimm fairy tales complete with vintage illustrations

The Fairy Tales of the Brothers Grimm brings to life fourteen of the most beloved Grimm stories, including classics such as Cinderella, Snow White, Sleeping Beauty, and Hansel and Gretel, in a vibrant and meticulous new translation commissioned for this publication.
Containing a selection of charming vintage illustrations from the 1820s to the 1950s by true masters of pictorial invention-—the legendary Kay Nielsen, bestselling children’s books author Gustaf Tenggren, British artists Walter Crane and Arthur Rackham, and giants of nineteenth century German illustration Gustav Süs, Heinrich Leutemann, and Viktor Paul Mohn, as well as many new discoveries—this compilation also features historic and contemporary silhouettes that dance across the pages like delicate black paper lace. In addition to the tales and illustrations, the book contains a foreword on the Grimms’ legacy, brief introductions to each fairy tale, and extended artists’ biographies in the appendix.
For adults and children alike, this opulent edition rekindles the eternal magic of the Grimms’ tales—the second most widely read collection of stories in the world after the Bible.

The authors:
Brothers Jacob (1785–1863) and Wilhelm Grimm (1786–1859) were German academics and linguists who spent years collecting popular fairy tales and folk tales. Their resulting compilation of over 200 stories Kinder- und Hausmärchen (Children’s and household tales) is one of the most famous collections of tales in the world, influencing generations of writers, artists, academics, composers, filmmakers, and animators.