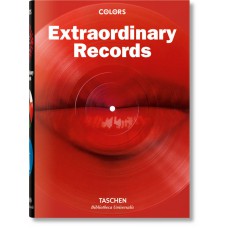 The visual of vinyls
The most daring of record designs

Now available as part of TASCHEN’s Bibliotheca Universalis series, this dazzling catalog of vinyl brings new meaning to the “album art.” Produced in collaboration with Colors magazine, it brings together over 500 remarkable records from the collection of Alessandro Benedetti and Peter Bastine.
The book forms a junction between photography, music, and design, celebrating vinyl not only for the integrity of sound recording, but also for its artistic potential as a material form. With featured artists including Pink Floyd, Prince, Michael Jackson, Bon Jovi and beyond, it offers compelling insight into the most intricate details of a performer’s visual identity, from a flamboyant color to a futuristic mirror effect.
The discs are arranged thematically to span monochrome vinyl; unusual vinyl (including silver, gold or mirror vinyl as well as extremely rare glow-in-the-dark vinyl); multicolored vinyl; etched vinyl (where music is pressed onto only one side); shaped vinyl (cut into forms that are different from the classic round disc); and picture discs (where a photograph or design is stamped onto the surface of the record).

Alessandro Benedetti began collecting colored and unusual records in 1981, and now has 8,000 discs, including 1,200 colored vinyl discs. In 1998 his collection won recognition in The Guinness Book of Records. His dream is to open a record museum so he can share his collection with the public.

The contributor:
Peter Bastine has been a DJ, record seller, and concert organizer. From 1977 until 1998 he collected every kind of picture disc; since then, mostly historical 78rpm records. Today his collection comprises around 8,000 picture discs, and has been the subject of several European exhibitions.