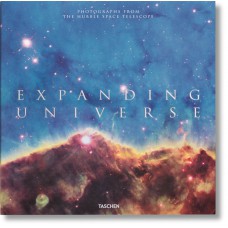 Time, Space, and a Telescope
Hubble’s most magnificent images

With investigations into everything from black holes to exoplanets, the Hubble Telescope has changed not only the face of astronomy but also our very sense of being in the universe. On the 30th anniversary of its launch into low-earth orbit, this updated edition of Expanding Universe presents 30 brand new images, unveiling more hidden gems from the Hubble’s archives.

Ultra-high resolution and taken with almost no background light, these pictures have answered some of the most compelling questions of time and space while also revealing new mysteries, like the strange “dark energy” that sees the universe expanding at an ever-accelerated rate. Now, the precision of the telescope is matched with the precision of TASCHEN reproduction standards, allowing its most breathtaking deep-space images—in equal parts scientific feats and photographic masterpieces—to mesmerize in their iridescent colors and vast, fragile forms.

The collection is accompanied by an essay from photography critic Owen Edwards and an interview with Zoltan Levay, who explains how the pictures are composed. Veteran Hubble astronauts Charles F. Bolden, Jr. and John Mace Grunsfeld also offer their insights on Hubble’s legacy and future space exploration.

“Prepare to be awed! The Hubble telescope has flung open the doors to our universe, in all its majesty and wonder. This book literally puts the cosmos in your hands.”
— James Cameron

The contributors:
Charles F. Bolden, Jr., Major General, USMC (Ret.), is a former Administrator of NASA, where he oversaw the completion of the International Space Station. He spent 14 years as a member of NASA’s Astronaut Corps, and commanded and piloted the Space Shuttle Discovery on STS-31, which launched the Hubble Space Telescope into orbit.

Owen Edwards has written about photography for more than 30 years for numerous publications including American Photographer, New York Times Magazine, and Smithsonian.

John Mace Grunsfeld, PhD, is an astrophysicist and a NASA astronaut. He has flown five times on the Space Shuttle, including three Hubble servicing missions. He has served as the Associate Administrator for the Science Mission Directorate, the NASA Chief Scientist, and as the Deputy Director of the Space Telescope Science Institute.

Zoltan Levay is a retired principle science visuals developer at the Space Telescope Science Institute, where he worked with astronomers and communicators worldwide to publicize science results from NASA's Hubble Space Telescope.