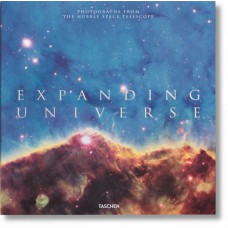 Time, space and a telescope
Hubble’s most magnificent images

On the 25th anniversary of the Hubble Telescope first being launched into low earth orbit, TASCHEN brings together some of its most breathtaking deep space images.
Hubble’s orbit outside the Earth's atmosphere allows it to take extremely high-resolution images with almost no background light. Its acute observations have answered some of the most compelling questions of time and space, and simultaneously revealed whole new mysteries, like the strange “dark energy” that sees the universe expanding at an ever-accelerated rate. With investigations into everything from black holes to exoplanets, Hubble has changed not only the face of astronomy, but also our very sense of being in the universe.
This awe-inspiring collection celebrates Hubble's images both as scientific feats and as photographic masterpieces. In generous square format with several foldouts, these pictures of planets, galaxies, stars, nebulae, and beyond mesmerize in their iridescent colors, intricate textures, and forms at once fragile, vast, and elegant. An essay by photography critic Owen Edwards illuminates the pictures from a photographic perspective while an interview with Zoltan Levay explains how these images are composed. Veteran Hubble astronauts and leaders in the space community Charles F. Bolden, Jr. and John Mace Grunsfeld also offer their personal insights on Hubble’s legacy and the future of space exploration.

The contributors:
Owen Edwards has written about photography for 30 years, for the American Photographer, New York Times Magazine, New York magazine, The Village Voice, Saturday Review, Vogue, Smithsonian magazine, and many other publications.

Zoltan Levay is Imaging Lead at the Space Telescope Science Institute. He works with astronomers and communicators world-wide to produce images and illustrations to publicize science results from NASA's Hubble Space Telescope. He has produced many of Hubble's most widely reproduced images and has described the process of making colorful images from Hubble data in popular articles, talks, and interviews.

Charles F. Bolden Jr., Major General, USMC (Ret.), was nominated by the president and confirmed by the Senate as the 12th Administrator of NASA in 2009. He has overseen the completion of the International Space Station—the world’s only orbiting research laboratory—and set NASA on course for an unprecedented human journey to Mars in the 2030s. During his 34-year Marine Corps career, Bolden spent 14 years as a member of NASA’s Astronaut Corps, traveling to space four times between 1986 and 1994. He commanded two of those missions, piloting the Space Shuttle Discovery on STS-31, which launched the Hubble Space Telescope into orbit, and STS-60, the first joint U.S.-Russian shuttle mission, which featured a cosmonaut as a member of his crew.

John Mace Grunsfeld, PhD, is an astrophysicist and an astronaut. He has flown five times on the Space Shuttle, including three Hubble servicing missions, logging 58 hours and 30 minutes of spacewalk time. He has served as the Associate Administrator for the Science Mission Directorate at NASA since 2012, and previously served as the Deputy Director of the Space Telescope Science Institute, managing the science program for the Hubble Space Telescope and the forthcoming James Webb Space Telescope.