login | create an account
Categorie
Home » Search » EMPEROR MAXIMILIAN I: THE ADVENTURES OF THE KNIGHT THEUERDANK

EMPEROR MAXIMILIAN I: THE ADVENTURES OF THE KNIGHT THEUERDANK 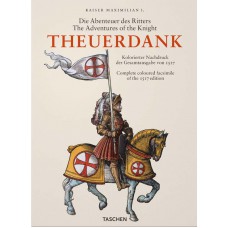 The amazing tales of the knight Theuerdank and his companion, Ehrenhold, comprise the last great epic verse of the late Middle Ages. The courageous knight`s journey to woo his future wife, Mary of Burgundy, and his triumph in battles and other dangerous situations are the focus of this highly embellished "real-life" story of Emperor Maximilian I (1459–1519). King of Germany before becoming Holy Roman Emperor in 1508, Maximilian was a great patron of the arts and commissioned a trilogy of ornate, illustrated books to immortalize his existence. Theuerdank, the only volume to be published during his lifetime, was composed by Melchior Pfinzing based on Maximilian`s rather fanciful draft. The 118 ornate, gold-adorned woodcuts—one for each chapter—were made by Hans Burgkmair the Elder, Hans Schäufelein, and Leonhard Beck, while the typeface (known as the Theuerdank typeface and characterized by its striking "elephant trunks") was specially designed for the book by the printing workshop of Hans Schönsperger the Elder.

Theuerdank (named after Maximilian`s adventure-seeking alter ego) is both of great historical significance and exceptional beauty, and yet the only complete reprints published—none of which is still in print—have been in black and white. Uncolored 16th century originals sometimes surface and have fetched prices up to £35.000, but now the entire work can be appreciated, in stunning color and quality, for a much more modest sum. TASCHEN`s complete color reprint, made to exacting standards from an extremely rare hand-colored original from the Bayerische Staatsbibliothek, Munich, is accompanied by an 88-page companion booklet containing an essay by Stephan Füssel (covering Maximilian`s life and work, as well as his role in the art of printing and use of printed materials) and selections from Melchior Pfinzing`s original clavis, or "key," which was included in the original to kindly point out to Maximilian`s contemporaries exactly what part of the tales were more fiction than fact. The booklet also contains a chapter-by-chapter retelling of the tales in modern vernacular, exploring the narrative strategy and real events behind the allegories.

Füssel, who is also the author of TASCHEN`s Chronicle of the World and Luther Bible, said in reference to the latter: "The resonance concerning these 1800 pages in color at the price of 100 € is overwhelming…. Once again TASCHEN made it possible to spread scientific publications among a broad international public at a reasonable price-performance ratio. One could say that within the two years of cooperation, we fundamentally changed the facsimile market worldwide, taking advantage of most modern recording, typesetting, and printing technology." Never before have superb-quality reproductions of such documents been widely available and reasonably priced. The importance of TASCHEN`s Classics reprints cannot be overestimated and The Adventures of Knight Theuerdank is yet another stunning example.

The author:
Stephan Füssel is director of the Institute for Book Studies at the Johannes Gutenberg University in Mainz, and holder of the Gutenberg Chair at the same university. He has published prolifically on the early days of printing, the sale and publication of books between the 18th and 20th centuries, and the future of communications.

THEUERDANK. THE EPIC OF THE LAST KNIGHT
30.00€
Add to Cart