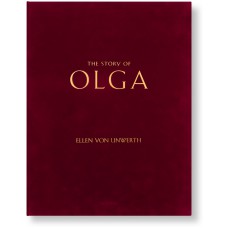 Artist Proof Edition of 200 copies (No. 1-200), numbered and signed by Ellen von Unwerth

Olga is back! After a first foray with Bettina Rheims for the 2008 limited edition smash hit The Book of Olga, the Russian heiress teams up with Ellen von Unwerth for The Story of Olga, a photographic narrative tracing the journey of the young widow Olga, who, after the death of her wealthy, elderly husband, is overtaken by an insatiable lust. She searches for love only to find it in the arms of an unlikely source, far from the riches and extravagance to which she is accustomed.
It is Olga’s quest that makes this fairy tale highly untraditional: she is a heroine who is not afraid of her lust, and it is her sensuality that leads her to the happy ending she so desires. Set in a glorious château, replete with all the trappings of wealth and glamour, this collaboration between Ellen von Unwerth and Olga Rodionova brings to life the enviable luxury of both fairy tales and modern desire.
Von Unwerth’s team of artists on this project include London-born Anna Trevelyan, a young stylist who creates a unique and eye-catching style that is dark, beautiful, provocative, and sexually charged; and French master set designer and prop stylist extraordinaire Fabienne Eisenstein, who is responsible for creating the pagan rituals and extravagant dinner scenes at the château.

The photographer:
Ellen von Unwerth worked as a top fashion model for 10 years, before taking up the camera and becoming one of the world's most in-demand fashion photographers. Her editorial work has featured in countless magazines, including Vogue, Interview, Vanity Fair and i-D, while her major advertising campaigns include Victoria's Secret, Banana Republic, Guess, Diesel, and Chanel. In 1991 she was awarded first prize at the International Festival of Fashion Photography, and her work was featured in Archaeology of Elegance (2002) and Fashioning Fiction at MoMA/Queens (2004). Her many individual exhibitions include a one woman show at the Hamilton Gallery in London, and her photo-novella Revenge (2003) was accompanied by exhibitions in New York, Paris, Amsterdam, Hamburg, Moscow and Beijing.