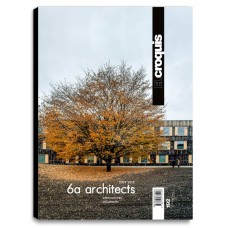 6a architects was founded in 2001 by Tom Emerson and Stephanie Macdonald, who met at the Royal College of Art, and rose to prominence with the completion of two critically acclaimed public art galleries, Raven Row (2009), and the expanded South London Gallery (2010). The practice is best known for its contemporary art galleries, educational buildings, artists’ studios and residential projects, often in sensitive historic environments and has won major national and international competitions as well as having been recognized with several prestigious awards, including riba Awards and consecutive nominations for the European Union Prize for Contemporary Architecture –  Mies Van der Rohe Award (2011, 2013 & 2015). In 2012, it was awarded the Schelling Medal for Architecture. 6a continues to work collaboratively on projects across the fields of art, exhibitions, fashion and science, having earned a reputation for sensitivity and diversity in the practice’s approach.