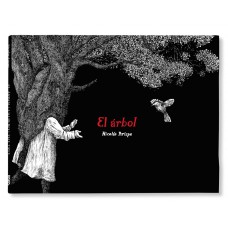 In the middle of the night, a newborn is abandoned in the foundling box. The wheel turns its half-circle, ratifying its new birth to the life of the orphanage. This may sound as the beginning of a once ordinary story, except for an apparently insignificant detail: a sprout has appeared on the child's head.
Nicolás Arispe once again enchants us with the dense hatching of his ink, creating anthropomorphized animal characters like the protagonists of Il libro sacro, Lasciate ogni pensiero o voi ch’intrate and Lungo è il cammino. In this animal world, the breaking element is represented by something that belongs to another kingdom: the vegetable one.
At first, the tutors and pupils of the orphanage strive to treat the “different one” like everyone else; however, amid the general bewilderment, over the years the true nature of the orphan does not retreat, but takes hold until it takes over, transforming it into a hybrid in which the tree gradually prevails over the animal. Then bewilderment turns – slowly but irremediably – into fear, and fear into intolerance, cruelty and violence.
The Argentine author and illustrator starts from the emblematic image of the foundling box to deal with the themes of education, diversity and integration, with his usual candid and at the same time ruthless honesty. In this story, education amounts to pigeonholing, standardisation to a society in which every deviation from the norm is marginalized, repressed, deleted. Faced with the impossibility of shaping the tree-boy with the same mould used for everybody else, society gives up and repudiates him, hides him, locks him up.
However, in the prison where the different one is locked up, there is a glimmer of hope: individual uniqueness withstands every abuse and bursts onto the austere black and white page with the liberating and rebellious power of colour. A non-violent, but delicate colour: a gentle and nuanced revolt.

Nicolás Arispe was born in Buenos Aires in 1978 and studied drawing and visual arts at the Instituto Universitario Nacional de las Artes (IUNA). Since 1997 he has worked for TV and movie productions, taking part in the creation of animated movies and cartoons, distributed in Argentina, Brazil, Mexico and Spain, in the design of CD and book covers and in some editorial projects.
His first illustrated book dates back to 2005; since then, he has created several other books and illustrated the work of various writers, among which María Teresa Andruetto, Alberto Laiseca and Alberto Chimal, published in Argentina, Mexico, France, Italy, Guatemala, Spain, etc.
During his career he has been awarded by ALIJA (Asociación de Literatura Infantil y Juvenil de la Argentina), the Argentinian section of IBBY (2005 and 2016), by the Banco del Libro de Venezuela (2013 and 2018), by the Cámara Nacional de la Industria Editorial de México (2013 and 2016), and by the Feria Internacional del Libro de Bogotá (2016), and has been selected for the White Ravens 2016 catalogue by the International Youth Library. In 2018 he entered the IBBY Honour List for his work as an illustrator.
Since 2001 he has been teaching art to children, teenagers and adults.
Books published by #logosedizioni: La madre e la morte / La perdita (2016), Il Libro sacro (2017), Lasciate ogni pensiero voi ch'intrate (2018), Tutti contenti (2019), Atti della gloriosa compagnia dei martiri (2019), Lungo è il cammino (2019) and El árbol (2020).