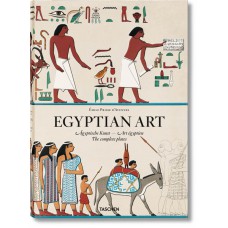 Symmetry and opulence
Art and architecture of ancient Egypt

An ardent admirer of the superb skills of the ancient Egyptian and Oriental artisans, the French Orientalist, author, and artist Emile Prisse d’Avennes (1807–1879) made enormous contributions to the field of Egyptology. As a youth he dreamed of exploring the Orient, and at 19 began his travels, by visiting Greece, Palestine, and India. Over the next 40 years he travelled to Syria, Arabia, Persia, and lived for some time in Egypt and Algeria. Prisse d’Avennes explored Egypt disguised as an Arab, using the name Edris Effendi. A student of ancient Egyptian and Islamic cultures, he later wrote in his History of Egyptian Art: “I have selected the most elegant models, those whose shape gives a very exact idea of the taste and luxury of this period, when Egyptian artistry was at its most brilliant.” In 1844 Prisse d’Avennes travelled from Alexandria to France, where, three years later, he published Les Monuments égyptiens. The volume contains 51 plates—mainly chromolithographs, but also some color plates—based on drawings made during his years in Egypt. After again visiting North Africa, he returned to Paris in 1860 with the fruits of his numerous journeys—hundreds of folio drawings, photographs, sketches, plans, and 400 meters of bas-reliefs. Fascinated by the symmetry, complexity and opulence of Egyptian and Arabic art, he drew from his vast collection to create compilations of art and architecture, based on his study of original documents and historical, social, and religious context. His beautiful album of Egyptian art was published in its entirety in Paris in 1878 as L’Histoire de l’art égyptien containing 159 stunning plates.
For this publication, these splendid illustrations of architecture, sculpture, paintings, and industrial arts, brilliantly conveying the history and variety of ancient Egypt’s art and culture, are reproduced in facsimile and for the first time published together.

The author:
Salima Ikram is a professor of Egyptology at the American University in Cairo and has participated in many Egyptian archaeological projects. After double majoring in history as well as classical and Near Eastern archaeology at Bryn Mawr College in the United States, she received her PhD in Egyptian archaeology from Cambridge University. She has directed the Animal Mummy Project, co-directed the Predynastic Gallery project and is co-director of the North Kharga Oasis Survey. As an acknowledged expert she has lectured on her work all over the world. Salima Ikram is also the author of several books on Egyptian archaeology, publishes in both scholarly and popular journals, and is a contributor to various magazines.