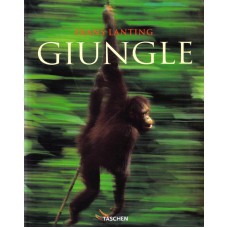 In this personal exploration of the tropics, master photographer, storyteller, and naturalist Frans Lanting presents the extraordinary nature of the world’s deepest jungles. This unique image collection, created over a period of 20 years, spans Africa, Central America, and the Amazon Basin to document the aesthetic splendor, precious diversity, and intricate ecosystems of these extraordinary spaces.

The book is arranged into four portfolios of jungle stories: “Water and Light” shows the interplay of these elements with plant and animal life, with a feature about life after dark in the jungles of Central America. “Color and Camouflage” explores the need to hide and the desire to be seen, and details a journey to a remote part of the Amazon Basin to document macaws. “Anarchy and Order” features impressions of growth and movement in the jungle, and follows a trek up a mountain in Borneo. And “Form and Evolution” is an ode to the wonders of natural selection, including fascinating encounters with primates in the forests of Madagascar and Africa.

From mesmerizing creatures padding softly between the trees to dawn-mist panoramas, from rainbow-colored feathers to acres of moist, verdant vegetation, Jungles is an ode to the beating heart of life on earth.