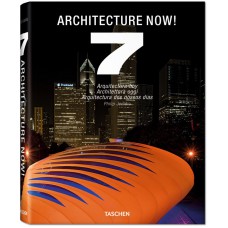 Architecture in a new economic climate

TASCHEN’s Architecture Now! 7 features an arching overview of today’s architecture, from modern to radically avant-garde. As with previous books in the series, Architecture Now! 7 includes a broad variety of projects from around the world, as well as some works of art that have a direct relation to architecture, from the likes of Giacomo Costa or Shinro Ohtake. It also explores how the recent economic downturn has led to fewer large-scale projects, but has also stimulated creative thinking, as architects find new ways to work imaginatively inside budget constraints. Large-scale works include the futuristic Chinese Central TV Tower in Beijing (OMA) and the Burj Khalifa (SOM), the world’s tallest tower and centerpiece of the Gulf region’s most prestigious urban development to date.

For anyone interested in the zeitgeist and building design in the 21st century, Architecture Now! 7 is an essential work of reference. Easy-to-navigate illustrated A–Z entries include current and recent projects, biographies, contact information, and websites.