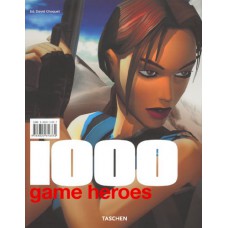 From cute, furry little rodents to gnarly, sword-wielding giants, video game heroes are the stars of this new book which catalogs 1000 characters, from the most famous to the most obscure, spanning the history of video games from their very roots to the present day. Arranged by categories (Violent Heroes, Sexy Heroes, Video Game Legends, etc.) and including three indexes (Name of the Game, Hero’s name, and Platform) the book is designed to be navigated like an encyclopedia or simply flipped through. Each chapter’s introduction is written by a famous game creator and describes the working process involved in creating the games and their heroes. For game aficionados, casual or one-time gamers, and anyone who has ever had a sore thumb from punching gamepad buttons, this book is not to be missed!

About the author:
Sign of destiny or simple coincidence, David Choquet was born in 1972, like the very first video game, Pong. In 1992 he began working as a video game-specialized journalist. He worked for the French magazine PC FUN until 2000, as staff writer and then deputy editor, and was subsequently editor of the French gaming portal: www.gamekult.com.