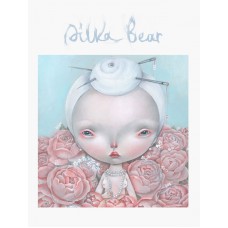 “This book is a collection of the characters that inhabit my dreams and my days. All of them tell a story and, even if sometimes I am still not sure what the story is about, I know I will get there. In the meantime, I hope you’ll like them.” –Dilka Bear
With these words, the author introduces a wide collection of her artworks, her world in 150 pages and 75 paintings. A world of strong emotions but also of intimacy, naivety and bewilderment. In a short introduction, she genuinely and confidentially tells her story: beside a picture of herself as a child, she explains her pseudonym and recalls her childhood in “a land that was the farthest away from the sea in the entire world, thousands and thousands of miles away from any coastline”. She tells about her dreams and games, but also about her studies and the decision to leave her motherland and devote herself to art.
The introduction is followed by a showcase of her stunning portraits of girls with expressive eyes: none of them smile, some are melancholic, some maybe know something that they can’t reveal, and they are usually accompanied by a weird pet, a sort of spirit animal. Dilka’s style is dreamy and fairy-tale and sometimes upsetting and creepy, influenced by the Brothers Grimm and other authors of fairy-tales.
Her techniques are interesting as well, as she ranges from acrylic to watercolour generally on a wood board, but sometimes also on a book sheet or on a sheet music.

Dilka aka Dilka Bear was born in Alma-Ata, Kazakhstan, in 1977. She received her art education at the Art Department of Almaty State University in 1996-2001. After her studies, she worked as a graphic designer and illustrator (“Cosmopolitan” Kazakhstan, “Grey” Central Asia, Saatchi & Saatchi Kazakhstan) until 2005. Since 2005, Dilka has been living in Italy and working as a freelance illustrator and artist.
Her paintings have been featured in many exhibitions in London, Los Angeles, Amsterdam, Rome and Australia.