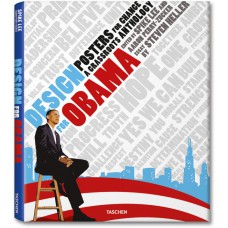 Hundreds of artists and designers expressed support for the Obama candidacy by designing posters and submitting them to designforobama.org for free download. This selection of the very best—curated by Spike Lee and Aaron Perry-Zucker—is a visual document of the most inspirational U.S. presidential campaign in living history.

From its inception, the Barack Obama campaign was destined to make history. Its message of inclusion and empowerment was spread by thousands of volunteers, a grassroots organization of unprecedented size and enthusiasm. Design for Obama built on this spirit with an online forum where artists, designers and supporters could upload their artworks and download others. Shepard Fairey’s social realist "Hope" poster became 2008’s enduring image, inspiring scores of designs that appeared on the streets, at rallies and registration drives, and in homes and offices around the country.

Edited by designforobama.org founder Aaron Perry-Zucker and filmmaker Spike Lee, this collection showcases over 200 of the best pro-Obama posters. Contributors range from prominent graphic and street artists to young up-and-comers. With essays by Spike Lee, Perry-Zucker, and design historian Steven Heller, this outstanding collection serves as a matchless historical document of the widespread visual creativity that helped spur Obama to victory.

The author:
Steven Heller is the co-chair of the School of Visual Arts MFA Designer as Author Program. For 33 years he was an art director for The New York Times, and currently writes the "Visuals" column for The New York Times Book Review. He is the author of 120 books on graphic design, illustration, and satiric art.

The editors and authors:
Spike Lee is a writer-director, actor, and producer whose groundbreaking movies include She’s Gotta Have It (1986), and the Oscar-nominated Do the Right Thing (1989) and Malcolm X (1992). The producer and director of numerous documentaries, music videos and commercials, he heads the advertising agency Spike/DDB and is the author of several books. He is a professor at NYU's Graduate Film program, and its artistic director.

Aaron Perry-Zucker graduated from RISD and co-founded a design studio and consultancy, Big New Ideas, specializing in big, new ideas across all design disciplines. He is currently writing a reality TV show, designing a new collective poster project, and living in Cambridge, Massachusetts.