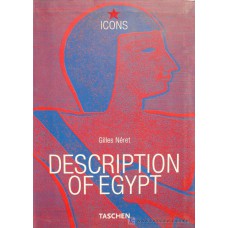 A hugely ambitious and comprehensive work, the 10 volumes of Description de l’Egypte were published following Napoleon Bonaparte’s 1798 invasion of Egypt. Here you’ll find the best highlights carefully plucked from the original masterwork in which discoveries of ancient Egyptian civilization, such as the Rosetta stone and the Valley of the Kings, were first revealed to the European world.

About the Series:
More bang for your buck! "...a fast-food, high-energy fix on the topic at hand." The New York Times Book Review on the pocket series
The author:
Gilles Néret (1933–2005) was an art historian, journalist, writer, and museum correspondent. He organized several art retrospectives in Japan and founded the SEIBU Museum and the Wildenstein Gallery in Tokyo. He directed art reviews such as L'Œil and Connaissance des Arts and received the Élie Faure Prize in 1981 for his publications. His TASCHEN titles include Salvador Dalí: I dipinti, Matisse and Erotica Universalis.