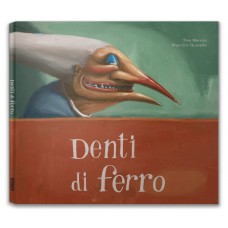 One day three little brothers, who spend their time wandering around, decide to disobey their mother’s advice and enter the dark and mysterious wood where, it is said, lives a witch named Iron Teeth. The youngest boy, fearful and aware of the danger, first tries to warn his brothers but then he ends up following them. The three children walk through the wood for such a long time that they don’t know how to go back home any more. All of a sudden, they catch sight of the witch’s house and decide to go there, where the old woman welcomes them and invites them to stay for the night.
Of course, this is a trap and it is the youngest brother, at first mocked by the others because of his fear, that turns out to be the wisest of the three, the only one who is able to recognize the witch for what she really is without being misled by her ostensible friendliness. Intelligent, clever, and brave too, the little boy takes the initiative and handles the situation when it becomes critical.
Stories and legends about witches are part of the oral tradition of many countries (Turkey, Russia, Germany…) and are rooted in an ancient literary tradition. Combining elements taken from Russian and Turkish folk tales, Tina Meroto brings us back to the world of classical fairy-tales, whereas the images by Maurizio A.C. Quarello make a wise use of shades and chiaroscuro, representing the genre’s topoi with all the characteristic we would expect… yet providing the witch with an unusual expressiveness. Although she is characterized by the typical hooked nose and by sharp nails and teeth, the old crone wears an unexpected blue eye shadow (and has moustaches and nose hair that look pricklier than those of your grandparents!) and shows a series of expressions – ranging from disgusted to impatient – that will make adult readers smile. After some thrills, the story’s happy ending will reassure the youngest readers showing them that, with a little astuteness and stubbornness, they can overcome any sort of obstacle.