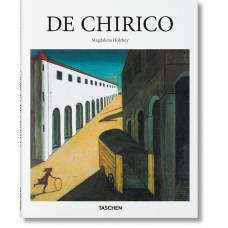 With his Pittura Metafisica, Greek-born Italian painter Giorgio de Chirico (1888–1978) was a major influence in Europe’s interwar avant-garde, hailed by the likes of Pablo Picasso and Paul Éluard.
The artist’s Pittura Metafisica set statues or mannequin-like figures in exaggerated one-point perspective spaces including city squares, receding arcades, distant walls, or claustrophobic interiors. Sharp perspectives, striking shadows, geometrical planes, and voids of space crafted a compositional drama and lurking mood of anxiety and loneliness.The paintings set out to disquiet, to make the viewer reassess the nature of reality and search beneath its appearances for elusive memories and unexpected insights. While the Surrealists around Breton turned to Freud’s theories of the unconscious, de Chirico was fascinated by Nietzsche.
This dependable artist introduction explores all the ominous shadows and brooding corners of de Chirico’s Pittura Metafisica as well as his later development into a more classical style, a shift widely criticized by the Surrealists who had so admired his early paintings.

“In the shadow of a man who walks in the sun, there are more enigmas than in all religions, past, present and future.”— Giorgio de Chirico

The author:
Magdalena Holzhey studied art history, Italian, and musicology in Berlin and Pisa. She held various academic and curatorial positions in galleries and museums, including the K20 Kunstsammlung Nordrhein-Westfalen in Düsseldorf, before becoming Curator of Collections of the Kunstmuseen Krefeld. She has published widely on classical modernism and contemporary art.