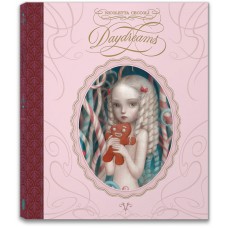 After Beautiful Nightmares, here come the daydreams of Nicoletta Ceccoli

Dreamy, melancholic and seductive but also disturbing, scary and eccentric, Nicoletta’s illustrations once again succeed in capturing the observers and dragging them into a world of contradictory visual emotions that cannot leave us indifferent.

Nicoletta’s work is characterized by the recurring theme of the loss of innocence, embodied by her fragile heroines, who are staged in a world full of paradoxes and dramatic loneliness and permeated by a fairy tale atmosphere, which evokes Flemish painting. The young teenagers painted by Nicoletta Ceccoli are somehow all Alices in search of their own identity and dreams, struggling with a changing body in a changing world that follows an illogical order, almost against nature. These innocently seductive girls seduce without even being aware of it. They are going through a delicate stage of life, the mystery of adolescence, when innocence disappears and the idea of sin emerges. The girls, however, hide behind a mask of impassivity to protect themselves. The frail-looking princesses do not expect to be saved by the prince. Locked in their castles and their mazes, they affirm their strength and independence... but also their loneliness.

“My works are childish, poetic and disturbing, they play with contradictions, as the dark counterpart of a nursery rhyme or a quiet dream in which the darkness show up. The nostalgia of lost innocence that shines through these works is autobiographical.” Nicoletta Ceccoli

Nicoletta Ceccoli was born in the Republic of San Marino and studied at the Art School in Urbino.
Since the release of her first work in 1997, she has published many books with several international publishing houses, including Random House, Simon and Shuster, Mondadori… Her books are appreciated by readers of all ages and have been translated into several languages in Europe, Asia and South America. Her illustrations have been exhibited seven times at the Bologna Children’s Book Fair and in prestigious galleries such as CoproNason (Los Angeles), Dorothy Circus (Rome), Magic Pony (Toronto), Richard Goodall Gallery (Manchester), Roq la Rue (Seattle). In 2001, Nicoletta was awarded the Andersen prize as best Italian illustrator of the year. She is also four-time winner of the award of excellence by the magazine Communication Arts. In 2006 she was awarded the silver medal by the Society of Illustrators (New York). In 2012 Mathias Malzieu has commissioned her the character design for his animation movie Jack et la mécanique du cœur, based on his book La mécanique du cœur and produced by Luc Besson.