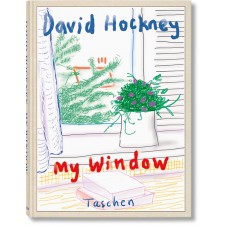 When David Hockney discovered the iPhone as an artistic medium, he opened up entirely new possibilities for painting. He made his first digital drawings in spring 2009. The iPhone was easy to use and he didn’t even have to get out of bed to start his working day, drawing morning impressions in broad lines and dazzling colors directly on his screen. In 2010, Hockney first used an iPad which, with its larger screen, expanded his artistic repertoire and enabled an even more complex interplay of color, light, and line.

Each image captures a fleeting moment, from the colorful sunrise and lilac morning sky to nighttime impressions and the arrival of spring. Fascinating details reveal drops on window panes, distant lights in the night, reflections on glasses, bottles, and vases an abundance of subtly varied vegetation. We experience the passage of time through the eyes of David Hockney.
This artist’s book, printed in large-format, brilliant resolution, presents these impressions in 120 drawings made between 2009 and 2012, arranged by the artist himself in chronological order.

The artist:
David Hockney (born 9 July 1937) is an English painter, draughtsman, printmaker, stage designer and photographer. Since Pop Art in the 1960s to the present day, he has been regarded as one of the most influential British artists of the 20th century.