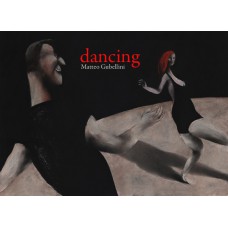 Shall we dance?
An illustrated book for adults, which is about desire and curiosity: a dancehall surrounded by mist; an orchestra playing music suggested through the characters’ movements; a different point of view but certainly not unique. The fascination in a world far from everyday stereotypes. The intimate libido of a full and mature age.

L'autore e illustratore:
Matteo Gubellini was born in Bergamo in 1972. He studied at the art college of his town before attending the Comic Academy in Milan. He has received many prizes as an illustrator and cartoonist, and has displayed his drawings in group and solo exhi¬bitions. He currently works as an illustrator in the field of printing and publishing, and cultivates his own passion for music and writing. Amongst his recent publications: Story of the House That Wanted to Move House, Artebambini, 2007; If I Were a Cat…, Bohem Press Italia, Trieste, 2008; A Real Lion, Bohem Press Italia, Trieste, 2009; La casa de mi abuela, OQO editora, Pontevedra, 2009; Kako je krokodil iskal nasmeh, Preserje, 2009.
His books for #logosedizioni are: Dancing, Nel cimitero, A casa della Nonna, La visita della domenica, Buzzati.