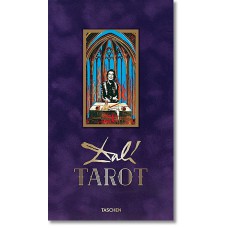 Legend has it that when preparing props for the James Bond film Live and Let Die, producer Albert Broccoli commissioned Surrealist maestro Salvador Dalí to create a custom deck of Tarot cards. Likely inspired by his wife Gala, who nurtured his interest in mysticism, Dalí eagerly got to work, and continued the project of his own accord when the contractual deal fell through.

The work was published in a limited art edition in 1984, the first-known Tarot deck completed by a well-known painter. Dating back to the Renaissance era, Tarot—thought by some to be an interpretation of dreams or a foretelling of the future—had seen a new surge of popularity during the 1970s hippie movement. Here, TASCHEN resurrects Dalí's fascinating deck of 78 cards, featuring compelling renditions of such characters and symbols as the Magician, the Lovers, the Moon, Death, the High Priest, and the Empress, in collage designs of drawings, icons, and color splashes. The deck is accompanied by a booklet by renowned German Tarot author Johannes Fiebig.

“Combining the occult with his own unmistakable sensibility, Dalí's Tarot is a pastiche of old-world art, surrealism, kitsch, Christian iconography and Greek and Roman sculpture.”
— openculture.com

The author:
Johannes Fiebig, born in Cologne in 1953, is one of the most successful authors on Tarot and a leading expert of the psychological interpretation of symbols and oracles. His main field of interest is concentrated on the use of Tarot and other symbolic languages as humanistic, psychological tools.