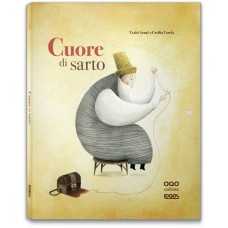 First reprint
What is the sound of the heart? And why does it beat? The old protagonist of this story will find it out during his journey, and we will find it out ourselves thanks to the story of this tailor who, unhappy with his life among rich and idle people, feels a great void in his chest. Being unable to fill this void, one day he decides to escape from his golden cage.
But how could he imagine that the world was in pieces? Poverty, wars, catastrophes… so many things to stitch and mend! With his needles, threads and scissors, the old tailor tries to alleviate suffering where he arrives. As he travels the world, he makes a lot of friends and leaves the end of one of his threads in each and every place he visits, so that they are all connected and the paths he has walked through are traced, in case he decides to come back one day.
The illustrations, pencils and acrylic on paper, sometimes strengthen what we read in the text, sometimes reveal what it doesn’t say. With great sensitivity, Cecilia Varela humanizes the elements of Nature, such as the sun and the moon, which smile at us from above or stare at us in amazement, while at the same time she seems to turn the tailor into his working tools. Doesn’t his body look like a ball of yarn? And his hat… is it really a cap, or is it perhaps a thimble?
A magic album, which starts with a tailor trapped in his peculiar cage and ends with a bird flying free holding a red thread in his beak. Don’t you want to know more?

The author:
Javier Ignacio Arnal Gil, “Txabi”, teaches Children’s Literature at the Faculty of Language education and literature at the UPV-EHU, Escuela Universitaria de Magisterio de Vitoria-Gasteiz, and has been a primary school teacher for 10 years.
In 2011 he completed his doctoral thesis on the theme of death in illustrated books for children, and now he teaches and writes books – mainly for children – both in Basque and in Spanish.
He has published some twenty books, among which: La Ladrona de Sellos, Edelvives, 2014; Nicolás, Edebé, 2012; Rompicapo, OQO, 2012; Caja de cartón, OQO, 2010, White Ravens selection 2011, and selected by the Banco del Libro de Venezuela as one of the best books for children published in Hispanic America in 2010; Cuore di sarto, OQO/logosedizioni, 2011, Premio Vittoria Samarelli 2012.

The illustrator:
Cecilia Varela was born in Argentina in 1973. She studied at the Escuela nacional de Bellas artes Prilidiano Pueyrredón in Buenos Aires. Early in her career she devoted herself to painting. Her works have been exhibited in many salons and cultural centers. In 1998 she received a scholarship by the Centro Cultural Borges and studied with artist Ana Eckel. In 2007 she was awarded the Illustrators’ Catalogue First Prize by Conaculta, Mexico City. Her works have been published in Spain, Mexico, Argentina and Italy, and she has participated in many exhibitions, such as Le immagini della fantasia (Sarmede, 2011), I colori del sacro (Padova, 2012), L’incanto del creato (Rieti, 2014).