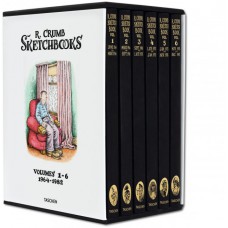 The artist:
Robert Crumb was born in Philadelphia in 1943 and was encouraged by his older brother Charles to draw comics in childhood. He credits his mid-’60s LSD use with turning him to the underground style that made his fame, best illustrated in the comics Zap, Snatch, Big Ass, Weirdo, and Hup. He has released scores of books, including TASCHEN’s Sex Obsessions (2007), and is the subject of the biographical film Crumb (1994). He lives in France with his wife, Aline Kominsky-Crumb.
The editor:
Dian Hanson produced a variety of men’s magazines from 1976 to 2001, including Juggs, Outlaw Biker, and Leg Show, before becoming TASCHEN’s Sexy Book editor. Her 60+ books for TASCHEN include The Art of Pin-up and Psychedelic Sex. She lives in Los Angeles.