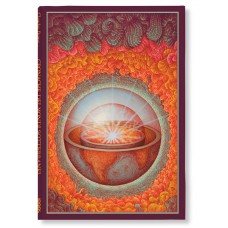 Cronache dei mondi sotterranei is the journal of the expedition through the bowels of the earth carried out by Attanasio, “traveler and man of peace”; an expedition from which he himself, while he is writing, is not sure he will come back.
Riding his biomechanical moth over the Antarctic ice sheet, the explorer approaches the depths of the icy polar pit, and from there he begins his descent till he arrives in sight of enormous plains surrounded by perennial ice and bathed in celestial light: it is the entrance to the underground worlds that he had long sought for.
Among strange creatures and layers of plants unaffected by the passing of time, amazing beasts and exotic insects, Attanasio passes through tunnels and observes boundless oceans, phosphorescent lakes and inland rivers, until he reaches an ossuary of colossal beings, certainly the remains of a battle between titans.
Leaving behind reptilians and endless galleries, Attanasio finally hears the familiar sound of human voices, speaking ancient Sanskrit and welcoming him to Agartha, the inviolable, “the soul of the earth”, a kingdom ruled by a group of wise elders and a philosopher king, where class divisions are abolished and everybody cooperates for the collective good. Temporarily interrupting his long pilgrimage, Attanasio visits Agartha’s library, which contains everything about human actions and thoughts (including the pre-Socratic tomes from the lost library of Alexandria) and is allowed to talk with the sovereign, who reveals him how the soul of the earth materialized in an internal planetoid. Leaving Agartha behind, Attanasio heads towards the world of Hecate, so called in honour of an ancient female divinity, a huge womb generating worlds, at the core of which is a shining star.
In his usual sparkling tones of red, orange and blue, and with great richness of details and wide perspectives, Claudio Romo leads us once again to the discovery of unknown worlds, straddling mythology and invention. Following the steps of Attanasio, a refined and cultured traveler who is capable of profound reflections on his own experiences, we are taken on an underground odyssey that offers us a kaleidoscope of cultural references by skilfully combining images and narration.
The author:
Claudio Andrés Salvador Francisco Romo Torres (Claudio Romo) is an illustrator and writer born in the port city of Talcahuano, Chile, in 1968. He studied Plastic Arts at the Universidad de Concepción and got a Master degree in Visual Arts with a specialization in Graphic Design at the Academia de San Carlos, Escuela Nacional de Artes Plásticas, UNAM México. He currently teaches graphic design and drawing at the Universidad de Concepción, Chile.

A JOURNEY IN THE PHANTASMAGORICAL GARDEN OF APPARITIO ALBINUS (GB)
18.00€
Add to Cart