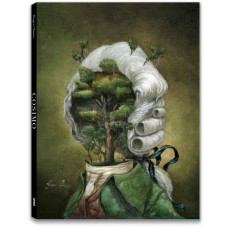 “I wish there were more Cosimos in the world. People who are able to remain faithful to their ideals and to abide by the decisions made. Cosimo brought me back to my childhood, when I used to climb trees, making and imagining tree houses hovering in the air amongst the branches. His life is like an endless game that defies gravity and the laws of the adults’ world and I too wondered – like everybody else – what it would have been like for me if I’d had the same strength and the same determination. What would it have been like for us all if we hadn’t given up?"

In this book I perched on the branches next to Cosimo, I looked down with him and I saw how everything is different from his perspective. And I shared a laugh with him.” – Roger Olmos

A book with no words, just illustrations, to celebrate and pay homage to #Cosimo, a kid that one day decided to live up in the trees and to never get down again.
Dedicated to the great Italo Calvino, who showed a different horizon, full of courage and passion, to all the children (and not-so children) who were so lucky to read his books, hoping that many others will read them.
Dedicated to all the children and the adults-to-be, to their dignity and to their right to be different and to not necessarily agree with the majority, so that one day they might stand by their decisions and be proud of their feats, however bizarre they may seem.
To determination. To courage. To love. To passion. To freedom.