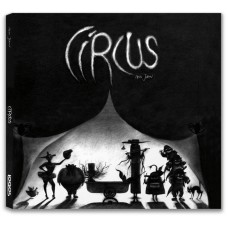 Narrative for the eyes

With no words, Circus is true to the idea that images are narrative for the eyes – eyes of all ages.

This quite gloomy story told in black charcoal with occasional splashes of colours – initially relegated to minor detail – develops around a circus. Its characters come to life before the eyes of two little girls and, therefore, of the reader, who is dragged into a bizarre adventure in black and white.

While cheerfully playing ball in an place free of connotations but far from reassuring, the twins are lured by a tree populated by spiders which, table after table, gradually takes on anthropomorphic features becoming one of the typical “tempting spirits” that often populate Ana Juan’s illustrations (e.g. in L’isola). Among magicians, jugglers and musicians, we follow a dance of quirky characters who – in a continuous movement to the right – invite us to turn the page with increasing frenzy, until we enter the circus and we see the show.

But nature isn’t always good in Ana Juan’s illustrations, who surprises us with an unexpected ending, emphasized by the bold use of red and orange.

Ana Juan about this book: “The circus is a closed universe, under that tent it seems that every wonder can take place. There are no rules nor laws, except those of magic and tragedy, happiness and sadness, cruelty and tenderness, poetry and hardness. [...] For example, the twins are the victims, like the two pigs: they are all fascinated by the spider that invites us to enter the tent and, like death, invites you to play with fire. All the other characters who parade have been alive, but they met their death along the way: suicides, accidents (for example, the siren was a young woman drowned).” www.circo.it/circus-la-favola-della-vita

The illustrator and author:
Ana Juan is a Spanish illustrator, author and painter. Born in Valencia in 1961, she moved to Madrid in the early 1980s. She exhibits her works and publishes her books all over the world – Spain, United States, Japan. Well acknowledged for her original, melancholic, romantic and sometimes merciless interpretation of reality and its stories, Ana has illustrated several covers for the New Yorker, editorials for El País and the covers of many novels by Isabel Allende and others classics of the world literature.
Ana Juan was awarded – among other prizes – the Ezra Jack Keats Prize for best new illustrator (The Night Eater, 2005), the Premio Junceda de Ilustración (For you are a Kenyan Child, 2007) and, in 2010, the prestigious Premio Nacional de Ilustración by the Spanish Ministry of Culture.