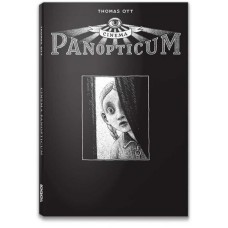 A little girl walks through an amusement park but everything seems to be too expensive for her until she finds a booth with “Cinema Panopticum” written on it. Inside there are five boxes, each containing a screen showing a movie. Each movie costs only a dime, so the girl puts a coin in the first box and the five movies follow one another before her eyes and ours… The only words that go with the pictures are the titles on the screen: The Hotel, The Champion, The Experiment, The Prophet, The Girl. Thomas Ott’s hallucinatory scratchboard etchings plunge us into darkness with five horror novelettes, including the framing story of the Girl.
The grittiness of this particular technique – using sharp knives and tools for etching on a thin layer of white China clay coated with black India ink – is skilfully counterbalanced by the richness of detail and the refined expressions the artist imparts to his characters. Their faces efficaciously exude thoughts and feelings: curiosity, joy, suspicion, disgust… and, above all, terror. A surreal work filled with black humour, a brilliant graphic novel that you will hardly forget.

The author and illustrator:

Thomas Ott was born in Zurich in 1966. After compulsory school, at the age of 16 he enrolled in a school of applied arts, and already during the years of his education he started to make his first drawings on a commission basis, while at the same time creating his own comics. After gaining a diploma in graphic design, he started to earn his living as a freelance illustrator for Swiss, German and French magazines, and very soon his first comic book, Tales Of Error, was published. In 1990 he moved to Paris, where he could gain all those experiences that would have been precluded to him in the quiet city of Zurich. Nevertheless, over time he felt the need to resume studying, this time at a film school. But he didn’t like any school in Paris, so he decided to go back to Zurich, where he enrolled in the Zurich’s School of Art and Design (HGKZ) and where he still lives. Since 2007 he has been a teacher at the Zurich University of the Arts (ZHdK).
His books for #logosedizioni are: R.I.P, Cinema Panopticum and The Number.