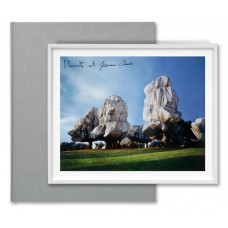 In Autumn 1998, after the trees around Fondation Beyeler and in the Berower Park had shed their leaves, Christo and Jeanne-Claude wrapped 162 trees—some up to 25 meters high—with 55,000 m2 of polyester fabric and 23.1 km of rope. The effect of light and weather on the translucent material created a kind of amorphous sculptural choreography, an ever-changing variety of shapes, surfaces, and colors. The fabric, used every winter in Japan to protect trees from frost and heavy snow, lent the trees the appearance of precious and fragile objects.

The Fondation Beyeler project was a pièce de resistance for Christo and Jeanne-Claude, at once an extension and expansion of many years of interest in a wrapped tree(s) concept. By 1998, the pair, renowned for their environmental interventions, had worked on trees for over three decades. In 1966, they wrapped a 10-meter high tree in a personal exhibition in the Stedelijk van Abbe Museum in Eindhoven. In the same year they worked on a wrapped trees project for Forest Park in Saint Louis, Missouri, and in 1968 for the Museum of Modern Art In New York. In 1969, Two Wrapped Trees were exhibited in Sydney.

Packed full of exclusive images and documentation, this volume traces the expansive history to Wrapped Trees as well as the project’s realization story, from start to finish. It includes preparatory drawings, collages, and plans from Christo and Jeanne-Claude’s archive, as well as numerous photographs of the final Wrapped Trees.

Limited Art Edition of 1,000 copies, each signed by Christo, Jeanne-Claude and Wolfgang Volz with an original cibachrome and a piece of the original project fabric.

The photographer:
Wolfgang Volz has worked with Christo and Jeanne-Claude as the exclusive photographer of their works since 1971. He was also project director (with Roland Specker) for Wrapped Reichstag and (with Josy Kraft) for Wrapped Trees, and was in charge of The Wall - 13,000 Oil Barrels, 1999. His close collaboration has resulted in many books and more than 300 exhibitions in museums and galleries around the world.