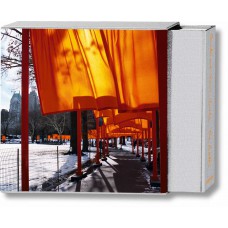 February 2005 marked the ephemeral installation of a monumental work of art by Christo and Jeanne-Claude in New York City’s Central Park. First conceived in 1979 and rejected by New York City government in 1981, the project was approved by Mayor Michael Bloomberg’s administration in 2003. The work of art consisted of 7503 16-foot-high vinyl gates with saffron-colored fabric panels on twenty-three miles of the Park’s walkways. Seen from the buildings surrounding the Park, The Gates looked like a saffron flowing river, while those walking through them experienced the ambience of a fluid golden ceiling. Financed entirely by Christo and Jeanne-Claude through their C.V.J. Corporation, The Gates were assembled and installed by thousands of paid workers. Completed on February 12, 2005, The Gates remained in place for sixteen days, after which they were removed and the materials recycled. The work of art was free for all visitors, who continued to use Central Park during the whole process. This historic event provided a memorable and joyous experience for New Yorkers and visitors.
This special collector’s volume documents the entire project from conception to realization. Designed by Christo and Jeanne-Claude, with texts by Jonathan Henery and photographs by exclusive photographer Wolfgang Volz, this limited-edition volume is the ultimate book object for fans and collectors who want a lasting and unique souvenir of this remarkable work of art.

The photographer:
Wolfgang Volz has worked with Christo and Jeanne-Claude as the exclusive photographer of their works since 1971. He was also project director (with Roland Specker) for Wrapped Reichstag and (with Josy Kraft) for Wrapped Trees, and was in charge of The Wall - 13,000 Oil Barrels, 1999. His close collaboration has resulted in many books and more than 300 exhibitions in museums and galleries around the world.

The author:
Jonathan William Henery is the son of Jeanne-Claude’s sister, Joyce May Henery. In 1993, he received a Bachelor of Arts from Fordham University. He is a musician and has been Jeanne Claude’s full-time assistant 1996-2009 and continues to manage Christo’s office today. Jonathan has collaborated on numerous publications about their work.