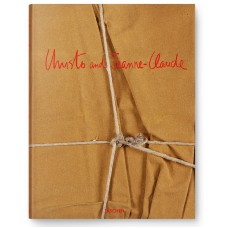 Hundreds of photographs and drawings trace the couple’s projects from the past 10 years, including The Floating Piers and The London Mastaba, as well as works in progress such as The Mastaba of Abu Dhabi and L’Arc de Triomphe Wrapped, Paris.

In addition to comprehensive photographic documentation by Wolfgang Volz and an updated introduction by Paul Goldberger, the book features a conversation between the artists and the author. It was the last conversation about their work that Jeanne-Claude had before her passing in 2009. The result is an eloquent homage to Jeanne-Claude and a celebration of the work of two artists whose imagination has affected the landscape of every continent.

“Each project is like a slice of our lives, part of something that I will never forget.”
— Christo