CHINA. PORTRAIT OF A COUNTRY (IEP) 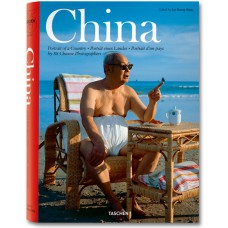 In post-Mao China, late Chinese leader Deng Xiaoping urged his one billion countrymen to "seek truth from facts." Taking its cue from Deng’s overture, China today is the leading economic story of the 21st century. The process by which China navigated the path from periphery to a central position in world affairs dominates the debate about Asia and China’s relationship to the western world. Pulitzer-winning photojournalist Liu Heung Shing charts the visual history of sixty years of the People’s Republic (1949 to 2008), and along the way aims to illustrate its humanistic course.
Via work by 88 Chinese photographers, this collection of images shows how the Chinese people have blossomed in spite of enduring previous decades of extraordinary hardship. When China opened the curtain at the summer Olympics in 2008 and the world’s focus fell upon Beijing, these photographs served to map out the remarkable road the Chinese had traveled to rejoin the rest of the world. To help place the images in context, also included is a chronology listing all the major political events in China.

The contributing authors:
James Kynge is an award-winning former journalist in Asia for 20 years. His book, China Shakes the World, was translated into 19 languages and selected as Goldman Sachs/Financial Times' Business Book of the Year in 2006.

Karen Smith is an art historian specialising in Chinese contemporary art. She has written widely on the subject and is the author of Nine Lives: The Birth of Avant-Garde Art in New China (Scalo, 2006 / Timezone 8, 2008). She also curates exhibitions, including The Real Thing, Tate Liverpool, 2007, and Chinese Photography and Video, Kunstmuseum Wolfsburg, amongst others. She is also on the advisory board of Three Shadows Photography Art Center in Beijing. She lives in Beijing since 1992

The editor:
Liu Heung Shing’s journalistic involvement with China runs parallel with the development of the People’s Republic. Following the 1979 China-U.S. diplomatic normalization, Liu was Time Magazine’s first photojournalist based in Beijing. His first story was on the death of Mao Zedong.  He has worked as a foreign correspondent for The Associated Press in Beijing (1979-1983), Los Angeles (1983-85), New Delhi (19851-89), Seoul (1989-1990) and Moscow (1990-1993). Liu is the author of China After Mao (Penguin 1982), and USSR: Collapse of an Empire (Associated Press 1992). In 1992 he shared the Pulitzer Prize for Spot News Photography on the coverage of the Soviet Union, and in 2005 French Photo magazine named Liu Heung Shing one of the 100 most influential figures in contemporary photography.