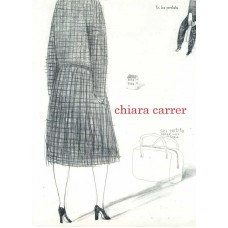 “The image shouldn’t be explained, but it allows of several interpretations so that everyone could build their own personal journey” says Chiara Carrer, one of the most productive and original Italian illustrators, who has been working in the publishing field for more than twenty years. This monograph traces back her career offering a selection of her most significant illustrations, and some thoughts about art and her own work. Ranging over several different techniques – drawings, collages etc. – this complete catalogue helps us explore and inhabit the full range of Chiara Carrer’s imagined world, at once tender and inquisitive, childlike and mysterious.

Chiara Carrer was born in Venice and, after graduating at the Academy of Fine Arts in Rome, she studied engraving at the San Giacomo School of Ornamental Arts. Since 1990 she has published over one hundred books all around Europe – among which Il Grande Ploff, Otto Karotto, Cappuccetto rosso, A qui la faute?, Alice raconté aux petits enfants, and the Lutin series – and she has been awarded several important prizes such as Apel Les Mestres, UNICEF, Il battello a vapore, Andersen, Österreichischer Kinder und Jugendbuch-lllustrationspreis, a Bologna Ragazzi Award (Prima Infanzia) mention at the Bologna Children’s Book Fair, a special mention by the Ilustrarte – International Biennial of Illustration, and in 2000 she was awarded The Golden Apple at the Biennial of Illustration Bratislava.
Among the many international and national solo and group exhibitions that have hosted her work, the following are worth mentioning: Il Lord delle Liane, Bambine terribili, ABC, Troisdorfer Bilderbuchpreis, Progetto Alice, Alice et Peter, Il Gigante Egoista, Eine imaginäre Bibliothek and Arlequin. She was a member of the jury of the Montreuil Figure future in 2004. She currently teaches at the ISIA, Urbino and lectures at the Academy of Fine Arts, Bologna.