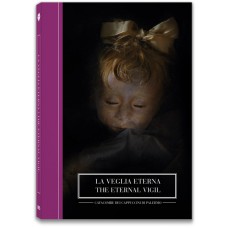 The reader is guided to descend the stairway that leads to the catacombs and, beyond the iron gate, here come the mummies. They are standing upright in white niches, wearing their withered clothes. They resemble a macabre version of the earliest black and white photos, where men with huge moustaches and women with bulky underskirts stand in stiff poses looking like stuffed dummies. The most beautiful one is little Rosalia, snug in her tiny coffin: her expression is serene, her skin smooth and soft, and her long blond locks are gathered by a yellow bow and endow her with an extraordinary feeling of liveliness. Whereas Rosalia Lombardo was embalmed, as were various other bodies present in the Catacombs, most of the corpses underwent a process of natural mummification – which does not involve the elimination of entrails and brain or the injection of special preserving liquids. An extremely ancient tradition across Europe, mummification was especially popular in Sicily, and the Palermo Catacombs still remain the most extraordinary expression of this tradition, , on account of the sheer number of corpses preserved there (1,252 bodies and 60 wooden coffins, some of them empty, according to the 2011 census). Page after page, the book is an historical and artistic guide to the largest collection of spontaneous and artificial mummies in the world.
The Capuchin friars were first established in Palermo in 1534, based in the pre-existing church Santa Maria della Pace. Initially, they were the only ones to be buried there even if, this so-called ‘burial’ consisted of them being simply wrapped in a sheet and lowered down into a kind of large cistern under the altar of Sant’Anna which became a mass grave or charnel house. The Capuchin community in Palermo was growing, therefore a larger burial place was needed,  both for reasons of health and space. For this reason, some years before 1599, excavations were begun to create an underground cemetery, and on completion it was decided to transfer the remains from the overflowing charnel house to the new space. But the opening of the stone which sealed the common grave brought with it a surprise: forty-five corpses which had been laid there – without coffins and piled on top of each other – were discovered to be practically intact. There was clearly something miraculous about this, it was felt, and so it was decided to display forty of these corpses in the new space, setting them all around its walls and placing an effigy of the Virgin Mary in a niche in the centre. And the five other uncorrupted bodies for whom there was no room were presumably returned to the common grave. The news of the corpses found intact in the Capuchin convent attracted great attention: little by little the Capuchins began accepting more and more “lay corpses” until finally, in 1783, they decided to concede burial to anyone requesting it. From that moment, the convent cemetery became a kind of free zone when it came to all civil legislation concerning cemeteries. Definitively closed in 1880, in special circumstance two further burials were carried out in the early 20th century: the first, in 1911, regarded the body of Giovanni Paterniti, vice-consul of the United States, and the second, in 1920, Rosalia Lombardo, a two-year-old child who is today known as “the most beautiful mummy in the world”.

This book about the Palermo Catacombs is the starting point of the #BizzarroBazar series, edited by Ivan Cenzi. The object of this series, with texts in Italian and English, is to enhance and explore some of our peninsula’s hidden wonders and invite people to think about its artistic and cultural heritage. The series conveys to the reader the same sense of astonishment and delight that can be experienced when entering a Wunderkammer. The absolute protagonists of the book are the amazing images by Carlo Vannini, one of the most recognized art photographers in our country, which offer the reader a perfect visual guide.

Foreword:
Dario Piombino-Mascali was born in Messina in 1977. An anthropologist specialised in mummy studies and paleopathology, he has previously been senior researcher at the European Academy in Bolzano, visiting scholar at the Medical Faculty of the University of Vilnius and lecturer on the History of Medicine at the University of Messina. A registered explorer with the National Geographic Society, he has also been involved in numerous scientific projects connected with the study of mummified humans, including the Iceman of the Alps, the Dutch bog bodies, the Egyptian mummies in various museums across Europe, and the Ibaloy mummies from the Philippines. He is currently the scientific curator of the Capuchin Catacombs in Palermo.

The author and editor:

Ivan Cenzi is an explorer of the uncanny and collector of curiosities. Since 2009 he has been the editor of #BizzarroBazar, a blog that deals with anything weird, macabre and marvellous, which in a short time has become the Italian landmark for this kind of topics. Over the years #BizzarroBazar has been dealing with wunderkammer, anthropology of death, museums and anatomical collections, history of the circus and travelling fairs, the early days of science, classical and modern art, alternative sexuality and in general anything at the outskirts of culture. He combines his work as a writer, editor and blogger with and intense work as a lecturer and collaborates with international museums and universities. From 2019, he is a lecturer for the master in Death Studies and for the degree course in Psychology of end-of-life relations at the University of Padua. He has contributed to various newspapers, written several foreword contributions for contemporary art publications and organized cultural events.